GUIDED WALKS IN CORNWALL WITH ABSOLUTOURS

Be immersed in heritage as you walk the South West Coast Path between the Botallack and Levant mines, UNESCO Cornish Mining World Heritage Sites. Discover and explore unique mine buildings, a well-preserved arsenic works and locations used in the filming of ‘Poldark’. Enjoy the beauty of Cornwall’s rugged ‘Tin Coast’, watch for choughs chattering above, and marvel at the feats of our ancestors on a guided walk with your local Cornish guide. 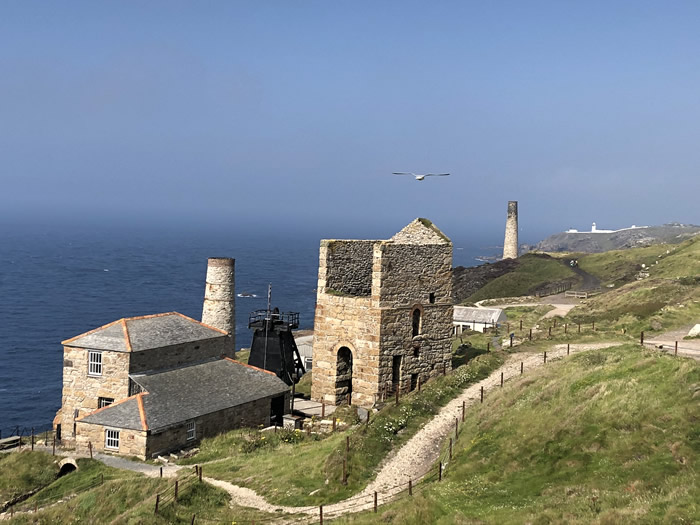 Explore the ‘Tin Coast’ lying in the Cornish Mining World Heritage Site. Visit outstanding historical sites and be immersed in the solitude and beauty of this unique natural landscape with its legacy of past industrial activity.

Whilst walking the South West Coast Path between Botallack and Levant, enjoy dramatic clifftop views of the rugged Atlantic coast.

Weave through a unique C19th arsenic works, towered over by an impressive chimney stack before exploring Wheal Owles, seen as Wheal Leisure in the BBC ‘Poldark’ series, and discover a memorial commemorating a C19th mining tragedy that helps reveal the real story that inspired Winston Graham to write his fictional Poldark novels.

Pausing at a spot above the iconic Crowns Mines located on a wave swept rocky ledge at the foot of the cliff, there is opportunity to capture the photogenic scene and hear how the mine became a popular tourist attraction. In 1865 royalty visited – the Prince and Princess of Wales rode the infamous tramway to the shaft head and proceeded to go underground!

A fairly level walk along an old cart track takes us onwards to the Levant mine site where the oldest working steam engine is housed, yet another site where tragedy struck local families and featured as a location in the Poldark series. On return a cream tea can be arranged nearby at extra cost- Jam First of course!

Walk around Pendennis Headland topped with an historic castle at the entrance to Falmouth’s picturesque natural harbour. Be rewarded with sweeping views of the Cornish coast towards the beautiful Roseland peninsula and across Falmouth Bay. Encounter golden beaches and gardens with exotic plants and palms and take the opportunity to indulge in a cream tea. Jam first – of course!

Moderate walking fitness. Sensible walking shoes, clothing suitable for weather conditions. Some paved, some uneven & unsurfaced tracks may make parts of this walk challenging for those with personal mobility considerations.

‘Thank you for giving us such an excellent introduction to Falmouth. Everyone thoroughly enjoyed the walk and found the information fascinating.’ SE Berkshire NT members 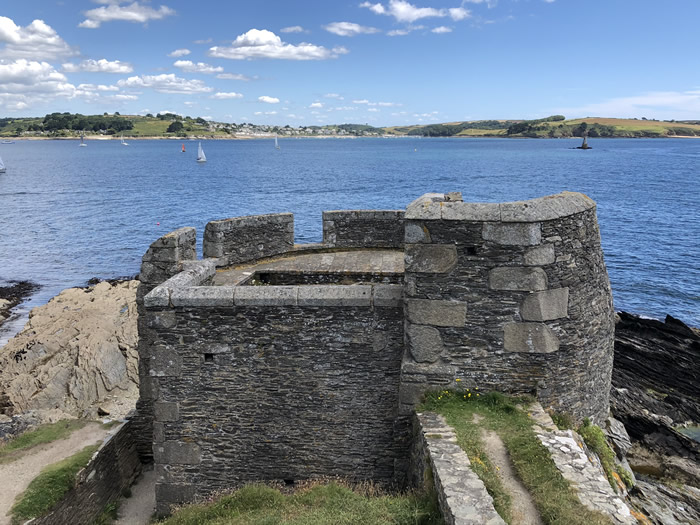 Walking towards Pendennis Point stop to look over the active dockyard. During WWII Falmouth was a safe haven for soldiers and refugees. As the docks were important to merchant and naval vessels, they soon became a target for German planes whose bombs also fell on the town. Barrage balloons were installed, the Half Moon battery at Pendennis castle reinstated and defences improved. Secret operations were carried out, not least those in preparation for D-Day when American troops were trained on the shores of the Fal and Helford rivers. Today maritime activity continues with commercial vessels, cross-channel ferries, naval ships, cruise liners and yachts visiting the harbour. Reflect on how the harbour developed from a C16th haven to a C17th Packet Ship port for clippers and its transformation into today’s tourist destination.

At Pendennis Point see the most southerly Coastguard Station in the UK, gaze across to the picturesque Roseland Peninsula. Walk along Castle Drive to Falmouth Bay, where Falmouth’s first Victorian hotel is found. Visit Gyllyngvase, Falmouth’s largest sandy beach and continue on the South West Coast Path to Swanpool before walking back along the sea front, for views of Pendennis Castle. Relax in Gyllyngdune Gardens where, if not already enjoyed, a Cream Tea may be on offer.

Walk historic maritime streets of Falmouth, a haven for explorers, merchants and the military. Explore fascinating corners of the town to discover unusual stories and characters associated with this ancient port and world’s third largest natural harbour.

Full Day – Combine with a half day guided Visit to the exotic Trebah Gardens, on the banks of the Helford River, from where US troops departed for the D-Day landings on the Normandy beaches. Public transport can be used between sites. Additional cost for optional extras.

Full Day – Combine with a half day guided visit to Pendennis Castle or the National Maritime Museum Cornwall in Falmouth Additional cost for optional extras. 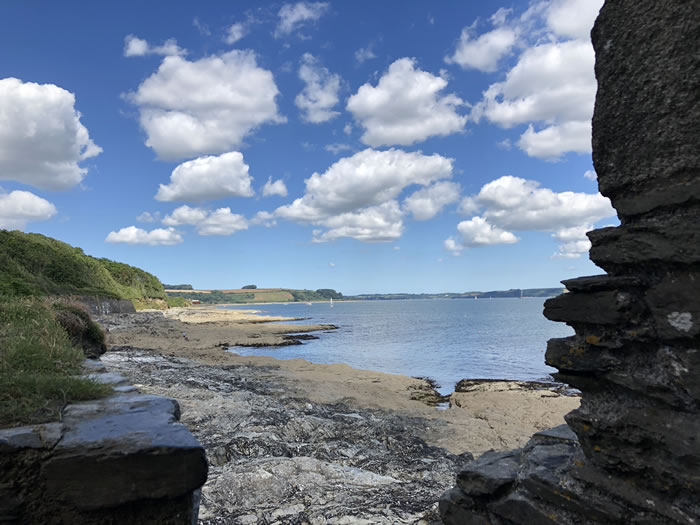 Explore the harbour, village and beach. Walk the South West Coast path to the Area of Outstanding Natural Beauty on the clifftop from where views of the Giant Ralph’s hideaway and Cornwall’s rugged coast extend into the distance before returning to the village for a Cornish Cream Tea. Jam First of course!

Low to Moderate walking fitness. Sensible walking shoes, clothing suitable for weather conditions. Uneven surfaces and tracks may make parts of this walk challenging for those with personal mobility considerations. Optional walk up to clifftop moderate on relatively steep slope. 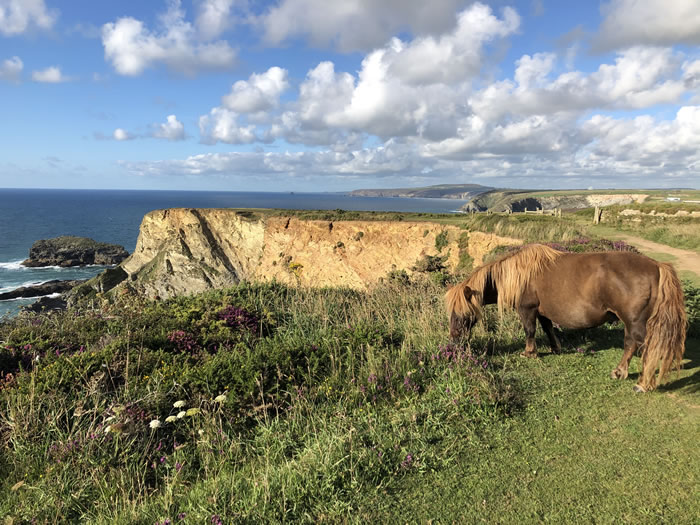 Explore Portreath, part of the Cornish Mining World Heritage Site, to share in stories and facts that only locals know. With its spacious beach nestled between rocky headlands, Portreath is a small resort less crowded than more well-known coastal hotspots.

Once a private Georgian spa and bustling Victorian port, changes in the demand for copper and tin, and investments by the land-owning Bassett family, reshaped opportunities and lifestyles for local people who previously depended on fishing and farming. Smuggling, wrecking & skirmishes with the French also have associations with this coastline.

Get to know this stretch of the North coast starting with a wander around the harbour. A specialist port for Cornwall’s most important copper and tin mining area in C19th developed to accommodate the Welsh fleet that imported coal and transported ore back to Wales for smelting. The port’s difficult and treacherous approach, lookouts, piers and capstans witnessed tragedy, shipwrecks and changing fortune in the local community.

Walking through the village we notice the unique railway incline, remnants of a tramway, the Red River and typical Cornish cottages. Surfers continue to catch waves rolling off the Atlantic as we investigate the dark cavern of Wheal Mary, an ancient copper mine, and the ‘baths’ hidden secretly in caves or cut into the cliff to provide spa waters for the Bassett ladies in the C18th.

On reaching Smuggler’s cottage there is the option to venture up Western Hill along the South West Coast Path for unrivalled views of uninterrupted seascapes and dramatic cliff top scenery before returning to the village or to just relax on the sandy beach and maybe swim in the sea and tidal pools before returning to the village to indulge in a ‘Cornish Cream Tea’ or Miner’s lunch which can be arranged as an optional extra.

Be immersed in heritage as you walk ‘The Great Flat Lode’ in the UNESCO Cornish Mining World Heritage Site near Redruth, C19th ‘Mining Capital of The World’.

Enjoy views to the coast from a mining landscape, now reclaimed by nature, on a guided walk with your local Cornish guide whose ancestors were part of the Great Migration that spread Cornish culture across the world.

Moderate walking fitness. Some uneven surfaces may make parts of this walk challenging for those with personal mobility considerations. Wheelchair friendly except for access to buildings and parts of South Wheal Frances mine site. Fairly level track between sites. Sensible walking shoes, clothing suitable for weather conditions. 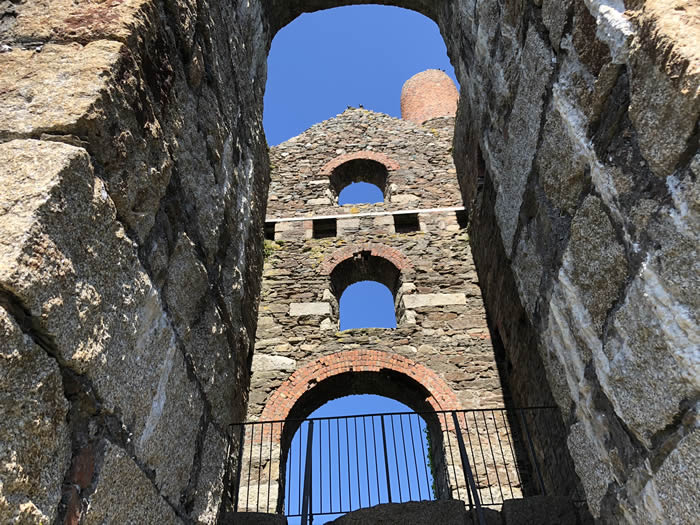 Stroll around part of the Great Flat Lode Trail to discover how C19th lifestyles in mining communities were shaped by the environment and changes in opportunity. When mines became uneconomic, family members left their homeland to spread across the UK and the world in search of better prospects. Due to this Cornish diaspora over 6 million people worldwide now claim Cornish ancestry.

Get up close to engine houses and unique buildings in the area with the highest concentration of historic mining sites in the world on this walk through the Camborne / Redruth Cornish Mining World Heritage site. Visit the impressive beast of an engine house at South Wheal Frances and peer down into the darkness of Marriott’s shaft, before moving across to the ‘thoroughly modern’ miners’ dry, one of many interesting buildings here.

Continuing along the route of a level tramway views of Carn Brea, topped by monument and castle, and landscapes stretching to the North coast are revealed. Imagine what it was like to live and work in the local mining community and how success or failure of the mines influenced lifestyles. On reaching Wheal Bassett gaze across at a complex of mine buildings, uniquely preserved, mirroring those where we stand. A ‘Miner’s Lunch’ can be arranged as an optional extra.

Walk over clifftops carpeted with wildflowers towards blue waters of secluded coves discovering Cornwall’s rich maritime and natural heritage along the way. 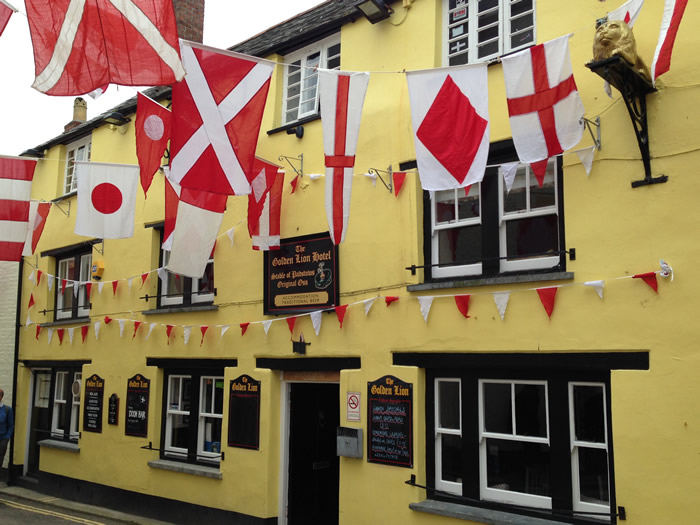 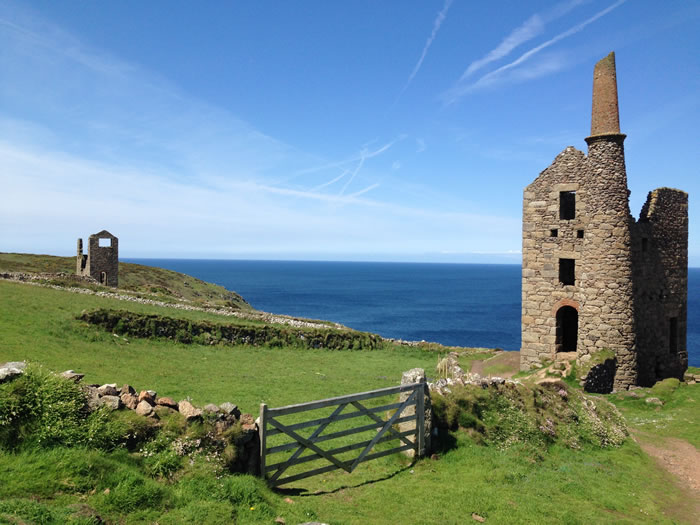 Winston Graham’s Poldark novels trace the lives of Ross Poldark and his contemporaries. Stories of business deals, rivalry, social events, personal liaisons and inequalities between rich and poor reveal links with history, film and fiction as we wander through Truro’s cobbled streets and lesser-known corners. As we wander through the city we uncover the truths behind dynamic lifestyles of landowning families and mining communities in C18th Cornwall as seen in the television series and imagine what the town was like before the cathedral was built.

‘Thank you for sharing your knowledge of Truro and how the Poldark story fits in!’ Bonny Wise & Fellow Poldarkians USA 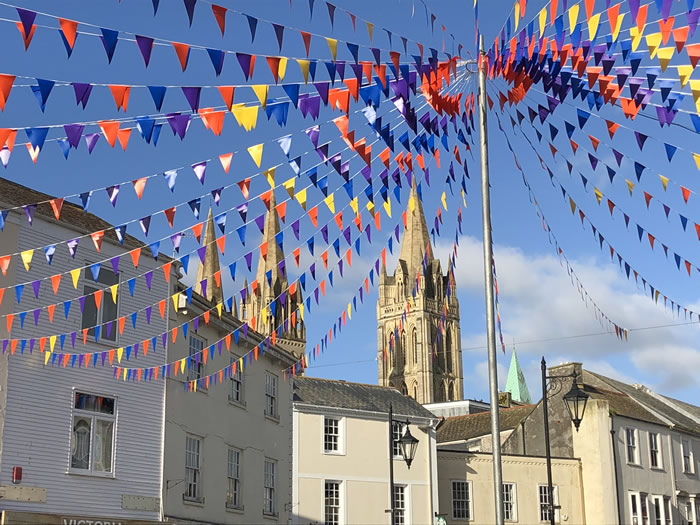